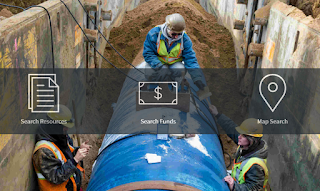 WASHINGTON - The U.S. Environmental Protection Agency is launching the Water Finance Clearinghouse, a web‐based portal to help communities make informed financing decisions for their drinking water, wastewater, and stormwater infrastructure needs. The Clearinghouse provides communities with a searchable database with more than $10 billion in water funding sources and over 550 resources to support local water infrastructure projects. It consolidates and expands upon existing EPA-supported databases to create a one-stop-shop for all community water finance needs. The Water Finance Clearinghouse was developed by EPA’s Water Infrastructure and Resiliency Finance Center, an information and assistance center that provides financing information to help local decision makers make informed decisions for drinking water, wastewater, and stormwater infrastructure to reach their public health and environmental goals.


“Every day, Americans depend on water infrastructure to ensure that their drinking water is safe and that local waterways stay clean,” said EPA’s Office of Water’s Deputy Assistant Administrator D. Lee Forsgren. “Investing in water infrastructure sustains local economies by creating jobs, protecting public health, and increasing quality of life. EPA’s Clearinghouse is a vital portal that helps connect communities with the information and tools they need to finance much needed water infrastructure improvement projects.”
Many communities around the country have aging or inadequate water infrastructure: each year approximately 240,000 main breaks occur while elsewhere billions of gallons of raw sewage are discharged into local surface waters from aging conveyance systems. Communities increasingly need efficient access to up-to-date water finance information to rehabilitate or replace their water infrastructure. EPA’s new Water Finance Clearinghouse meets this need.
The Water Finance Clearinghouse gives local decision makers an opportunity to search for available funding sources for water infrastructure as well as resources (such as reports, webpages, and webinars) on financing mechanisms and approaches that can help communities access capital to meet their water infrastructure needs. State, federal, local, and foundation funding sources and resources on public-private partnerships, asset management practices, revenue models, and affordability approaches are included in the Clearinghouse.
The Water Finance Clearinghouse is updated in real-time, following a crowdsourcing model. States, federal agencies, and other water sector stakeholders have the ability to suggest edits and new resources or funding options at any time through the Contributor Portal. Stakeholders can use this interactive feature to manage how their programs and initiatives are displayed in the Clearinghouse.
EPA webinars on how to use the Clearinghouse are scheduled for:
All webinars will be held 2:00 – 3:00 p.m. Eastern. You can register at: https://register.gotowebinar.com/rt/4533646364837520386
More information on the Clearinghouse: https://www.epa.gov/waterfinancecenter/water-finance-clearinghouse
Posted by Keith Magnon at 5:00 AM 2 comments: Links to this post

The Port of Gulfport is on the move! There are $450M worth of improvements planned. 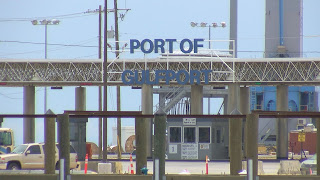 The Port of Gulfport is preparing to gear up for a major addition coming to the port's west terminal. A global company called SeaOne will ship liquid gas on vessels leaving the port to markets in Central America.
The port is part of a process on the cutting edge.
"It's brand new technology, they do have a Department of Energy permit. Gulfport is the only port in the United States authorized to ship this form of gas," said port director Jonathan Daniels.
The product will be shipped throughout the Caribbean basin. Trucks and rail cars will not be used. A pipeline will be constructed to move gas down to SeaOne facilities that will be built at the port.
"There will be two large scale pipelines from just north of I-10 underground, and ultimately attach to a facility on the port site," said Daniels.
The authority signed a 40-year lease with SeaOne. The project represents a private investment of $450 million. No public funding will be used to finance the effort.
That plan bodes well for tax revenue collected from the SeaOne pipeline, liquid gas plant and cargo facility.
"What that means [is] because it's not owned by the Port Authority, it's taxable. They have struck agreements with the county, city, and the school district. Usually you see projects on the port with a minimal amount of taxes, this will allow for about $4.5 million a year for the first 10 years," according to Daniels
SeaOne is expected to break ground on the project in 2018, and should be up and running in 2020.
Posted by Keith Magnon at 1:32 PM 3 comments: Links to this post