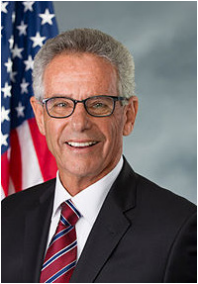 According to Congressman Lowenthal’s office, H.R. 3001 would raise around $8 billion a year through implementation of a national one percent waybill fee on the cost of transporting goods. Funding would be collected in a Freight Transportation Infrastructure Trust Fund, and annual collections would be divided evenly between two programs: a formula program that provides funds to each state, and a competitive grant program available to local, regional and state governments. According to the Congressman, funding would be dedicated to freight-related infrastructure projects throughout the nation, with a focus on multimodal projects and projects that rebuild aging infrastructure while relieving bottlenecks in the freight transportation system.

“Goods movement is the backbone of our economy. In order to maintain the standing of the United States as a global economic leader, we must invest in expanding the capacity, reliability, and efficiency of our nation’s goods movement system and freight infrastructure,” Congressman Lowenthal said in a press release. “And yet, that infrastructure is crumbling around us. We must take action to rebuild it and strengthen it, all in a way that also addresses the negative impacts of goods movement on our communities.”

During the 114th Congress, Representative Lowenthal introduced the “Economy in Motion Act,” which is largely similar to “National Multimodal and Sustainable Freight Infrastructure Act.” The freight policy and programming achievements made under the FAST Act advanced principles that were included in “Economy in Motion,” necessitating revisions to the original bill.

TITUSVILLE, Fla. - May 15, 2017 -  The Maritime and Port Security Information Sharing and Analysis Organization (MPS-ISAO) and Wapack Labs announce today a collaborative partnership to advance real-time access to sector-specific cyber threat intelligence for Maritime & Port owners and operators and the supply chains that support them.The MPS-ISAO, a non-profit organization, officially launched in May 2016, is dedicated to a mission of enabling and sustaining Maritime & Port cyber resilience. This is accomplished through the availability of MPS-ISAO real-time cyber threat intelligence including Maritime & Port community contributed information and multi-directional (cross-sector) information sharing and coordinated response working in collaboration with the U.S. Department of Homeland Security and the International Association of Certified ISAOs (IACI), and academic, technology and security strategic collaborative partners.The partnership announced today with Wapack Labs expands access to sector-specific cyber intelligence, analysis of community data via strict information sharing protocols, and response capabilities for Maritime & Port stakeholders and their supply chains.Deborah Kobza, MPS-ISAO Executive Director states, "The Maritime & Port sector is increasingly vulnerable and actively being attacked by a variety of adversaries including nation states, organized crime, hacktivists and insider threats focused on espionage, human trafficking, financial gain, supply chain disruption, identity and intellectual property theft, or to gain a competitive advantage. Many physical and cyber systems used in ports and maritime, such as navigation/GPS, physical security, communication, energy, environmental controls, industrial control systems (ICS), emergency controls, operations, cargo tracking, terminal operations, and cruise transportation, represent cyber attack targets. This partnership with Wapack Labs advances the capability of Maritime & Port stakeholders to move from a reactive to proactive cyber resilience stance."Wapack Labs joined the MPS-ISAO's invitation-only webinar in March, "Interconnectedness in the Maritime Industry? First Let Me Tell You a Story.", to present their private research which identified a financially motivated cyber adversary who has compromised thousands of port and maritime organizations and over a million user accounts. The MPS-ISAO and Wapack Labs will use this cyber intelligence research as a jumping-off point to increase industry awareness and protection.Christy Coffey, Director of Strategic Alliances, adds, "Wapack Labs is a perfectly suited partner for the MPS-ISAO. Their unique combination of cyber threat intelligence production with deep maritime and ports roots increases the level of early threat awareness that we can provide to our stakeholders. Wapack Labs have been tracking adversaries targeting this industry for a few years now, and so having them on our watch provides immediate gains."Wapack Labs' bolsters the MPS-ISAO's ability to deliver Cyber Intelligence as a combination of industry-specific and personalized cyber threat intelligence, shared multi-directional sector and cross-sector information, advanced analytics, coordinated response, and training on topics of high interest. By participating in the MPS-ISAO, Maritime & Port stakeholders grow their understanding of vulnerabilities and risk so that they can proactively protect their organizations."We are excited to be working with the MPS-ISAO", said Jeffery Stutzman, a co-founder and CEO for Wapack Labs. It's imperative that we elevate cyber awareness in this important industry, and get ahead of threat actors. The MPS-ISAO - with the help of Wapack Labs' Cyber Threat Analysis Center (CTAC) are force multipliers - real game changers in Maritime and Port industry cybersecurity."A 2016 report published by the U.S. Department of Homeland Security/Office of Cyber and Infrastructure Analysis (DHS/OCIA), "Consequences to Seaport Operations From Malicious Cyber Activity", states that a "cyber attack at a port or aboard a ship could result in lost cargo, port disruptions, and physical and environmental damage", and a disruption to U.S. ports can have a cascading affect to "Critical Manufacturing, Commercial Facilities, Food and Agriculture, Energy, Chemical, and Transportation Systems". This report includes a "Seaport Economics" section that details economic data points associated with sea trade.About the MPS-ISAO: Headquartered at the Global Situational Awareness Center (GSAC) at NASA/Kennedy Space Center, the MPS-ISAO is private sector-led working in collaboration with government to advance Port and Maritime cyber resilience. The core mission to enable and sustain a safe, secure and resilient Maritime and Port Critical Infrastructure through security situational intelligence, bi-directional information sharing, coordinated response, and best practice adoption supported by role-based education. The MPS-ISAO is a founding member of the International Association of Certified ISAOs (IACI). More information at: www.mpsisao.org.About Wapack Labs Corporation: Wapack Labs located in New Boston, NH is a privately held cyber intelligence company delivering in-depth strategic cyber threat activities, intelligence, analysis, reporting and indicators. Products are delivered through collaborative portals, private messaging and email, in multiple human readable and machine-to-machine form. Since 2011, Wapack Labs' have focused on tracking and profiling cyber adversaries, their tools, targets, attack methods, and delivering to subscribers in a way that can be quickly applied to the protection of computers, networks, and business operations. More information at: www.wapacklabs.com.
Posted by Keith Magnon at 3:32 PM No comments: Links to this post